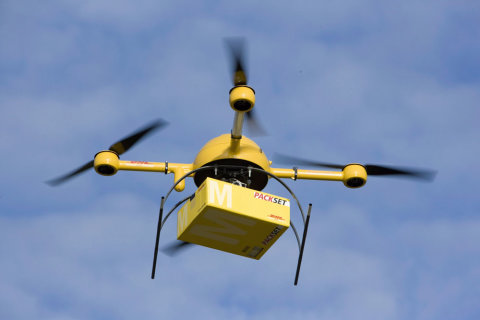 The use of unmanned aircraft systems – commonly known as drones have seen an unprecedented rise in demand for non-military purposes be it commercial or domestic uses. The great advantage to drones is that they can bypass any ground traffic and travel vertically without having to counter any on-ground hazards thus decreasing the travel time by a huge margin.
With the growing number of businesses and lesser human resource than ever, greater use and development of this technology is only inevitable .Use of drones can prove to be a huge advantage for businesses that require products to be delivered in short time spans like food delivery service. Many companies are currently experimenting with this idea of fresh food being parachuted right to customers’ doorsteps within minutes. Many courier services are also experimenting with package delivery system using drones. The potential of the drone technology in commercial uses is so great it already has entrepreneurs seeing it as a multi-billion dollar industry.
A far stretch from the typically imagined military uses where drones were typically used for bombing or reconnaissance purposes , drones are now being used to help in wildlife conservation by scientists performing difficult tasks like whale watching and counting sea lions in Alaska as well as farming purposes. Widely used drone applications are being found in the media industry for film making and aerial photography cutting down huge budgets , as well as for security purposes now enabling large areas to be monitored easily. Drones are already in place for monitoring drug trafficking across borders and conducting weather and environmental research. The future of drone technology will make the human brain and machine interaction even closer through integration with human thinking replacing the use of joysticks or artificial intelligence.
This is already showing promising prospects as it is expected it to grow to an estimated 90$billion industry .Many developing countries are now trying to pass proper legislations regarding the use of drone technology for commercial or domestic uses due to safety and privacy concerns and it is expected that after proper registration the skies could be buzzing with thousands of flying machines in the coming years.