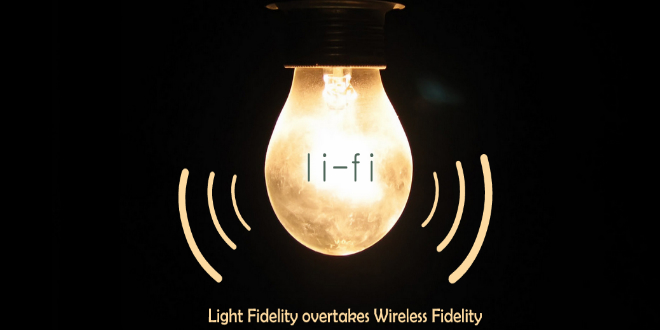 LiFi which is the short term for Light Fidelity is a wireless technology similar to WiFi. Even though it is still in the development stages the use of this technology could greatly modify the way we use the internet since it’s faster and more energy-efficient and potentially more secure as well.

LiFi belongs to the Optical Wireless Communication(OWC) family and could become a compliment to or replacement of WiFi in the coming times.It is a bidirectional , fully networked and completely wireless technology similar to WiFi but uses visible light communication which carries more information and has been suggested as a solution to problems associated with RF bandwidth limitation. It is also tested to be 100 times faster than Wi-Fi.

The process of data transfer is made possible with the use of LEDs as a medium. The current to the LEDs is switched on and off at a very high rate – too quickly to be detected by the human eye and it requires photo sensors to detect these changes for data transfer. Although Li-Fi LEDs are required to be kept on for data transfer to take place ,they can be dimmed to a level at which they are still able to transmit the signal but too low to be visible to human eye.

Like every other technology Li-Fi also comes with its own set of advantages and disadvantages. It offers some major advantages over Wi-Fi like it could be suitable to areas sensitive to electromagnetic interference like nuclear plants , aircrafts & hospitals and being much faster than the existing technology. Unlike Wi-Fi ,Li-Fi doesn’t have a limited spectrum range also as the visible light spectrum is 10,000 times larger than the RF spectrum. It can also resolves issues of data security.

Some major disadvantages are also there like Li-Fi can only be used over short range as it uses visible line of sight transmission and it could face issues of low reliability in presence of ambient or any other source of lighting as the photodetectors are required to sense the changes in light. Even though it is a technology that is expected to be 10 times cheaper than Wi-Fi it’s installation costs could be very high as all the devices would require additional hardware to be able to work on this technology.

Even though its still in its nascent stage, this technology is catching a lot of interest and the compound annual growth rate of its market is projected to be over $6 billion per year by 2018.