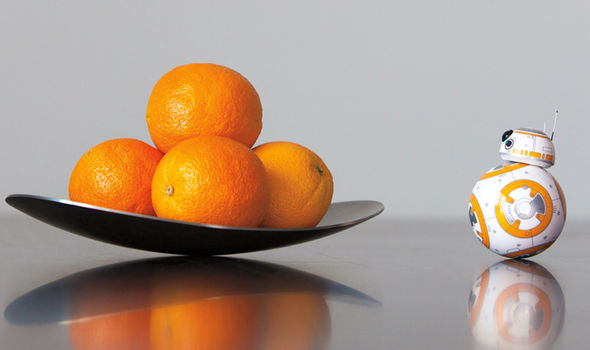 The cute little BB-8 is an astromech droid that made its first appearance in the latest Star Wars Series Movie “The Force Awakens”. BB-8 has a ball shaped body with a domed head resembling an upturned bowl balancing on top of it. This droid that resembles the original R2 series of droids has made it’s debut after about 30 years of the last release of the series and since then has become the unofficial mascot of Star Wars: The Force Awakens.

The interesting part is the internal working of the adorable looking BB-8 which is nothing short of amazing. Unlike being driven by a hamster inside as some theories suggested , the robotic ball which is the lower part of it’s body uses a gyroscope to determine which way is down and two wheels to move the sphere from inside. The base plate that includes batteries serves as a counterweight to keep the wheels acting against the lower half of the sphere. There's also a vertical bearing that helps to keep the wheels in contact with the walls. The best and most fun part to watch is the floating head , the mechanism of this is secured as a patent by Disney's Imagineering R&D group.

The cute rolling ball with a floating head seen in the movie now comes in a tennis ball sized collectors version as Sphero’s mini BB-8 droid. This is essentially a droid with intelligence that you can actually buy. Sphero was one of ten start-ups funded by Disney's first accelerator program in 2014. Disney CEO Bob Iger himself was Sphero's mentor inside the company. Sphero already had a rolling robot in the shape of the eponymous Sphero , so all they had to do was figure out how to attach the head. This little (10cm tall) droid has it’s head stuck on with magnets having all things expected from a collectors figure from detail-rich paint job to convincing sounds and quirks. So far, unlike the other robots from the company BB-8 doesn’t do a lot and is controlled via Bluetooth from an iPhone or Android smartphone and has a modicum of intelligence to sense its environment through bump mapping. A little computer in itself, users will soon be able to program their own BB-8 and and may eventually be able to do away with the smartphone and talk to it directly.